Ammo includes explosives, which are a major set of weapons in Sean Devlin's arsenal. As a saboteur, he keeps multiple explosives to demolish, damage, and destroy whatever gets in his way. He has multiple types of explosives, including grenades for personal combat with soldiers, Dynamite for destroying free-play targets including tanks, guard towers, gas fueling depots, and other Nazi equipment and stations. It is Sean's goal to damage the Nazi's presence in whatever way possible, making larger explosives very useful.

Grenades are useful for killing enemies that are behind cover or otherwise out of Sean's line of sight. They are also useful against light vehicles and equipment. Against heavier Nazi installations, however, grenades are relatively weak and the player is better off using other explosives, such as Dynamite.

Dynamite is a timed explosive with very large power. It is effective for use against artillery pieces, tanks, guard towers, and other Nazi equipment, however due to it's timer and relatively long placement time, it is not ideal for highly tactical use. Sean is also capable of placing Dynamite without lighting the fuse and then shooting it in order to detonate it.

RDX is a more versatile alternative that is fast to place, but its most distinct advantage is use of a remote detonator, allowing Sean to detonate it when he wants, instead of a fixed timer. This means the player can take as long as they want, or as quickly, as they want to detonate it. This makes it great in dynamic situations, allowing the player to set a trap or to get in and get out quickly, or set a quick timed distraction. Anything that is done with the RDX is possible to do with the Dynamite, but sometimes the RDX can be a better choice if precision is more important than damage. The player can also set multiple RDX charges at once. Activating the detonator will then rapidly set off all the charges in the order that they were placed.

Super RDX is a compromise between the Dynamite and the RDX. It keeps the versatility of the detonator on the RDX, but with a substantially improved explosive range and damage, making the power of advantage of the Dynamite quite lessened. Once the Super RDX is unlocked, the need for Dynamite is much lessened, but due to the ability to hold more dynamite and having separate inventories for their ammo, Dynamite charges can be used to lessen the need for the player to restock on their explosives.

The Bridge Killer kit is a special explosive that allows the player to set multiple explosives in pre-chosen spots on a bridge to destroy it. The bridge is one of the biggest free play targets and there are four bridges that can be destroyed in the game. Once a bridge has been destroyed, it will respawn when the player exits and then reloads the game. 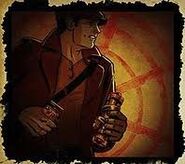