The Saboteur is a neo-noir open world third-person action-aventure video game set during World War II in German-occupied France. It was published by Electronic Arts and was the final game developed by Pandemic Studios.

The first scene of "The Saboteur" is Sean Devlin sitting in a strip club, known as Le Belle, when he is approached by one of the main characters, Luc, who tells him that he can tell Sean is not the average drunk. He tells Sean that he notices the hatred Sean feels toward the Nazis and tells Sean to meet him in the next street over if he wants to do something about it. Of course that being the main objective you walk over to the next alley and Luc tells Sean that they are going to sabotage one of the Nazi fueling stations. Once you are finished sabotaging the fuel depot you go into a flashback.

The game's protagonist, Sean Devlin, is a hard drinking Irish racecar mechanic, a regular among the racing groups of Paris. After being cheated out of a win in the 1940 Saarbrücken Grand Prix by Kurt Dierker, a Nazi colonel, Sean and his best friend Jules Rousseau seek revenge and sabotage his prized racecar. After being captured, Dierker executes Jules during interrogation under the belief they are really British agents sent to spy on him. Sean escapes and the rest of the storyline chronicles Sean's fight to kill the Colonel and avenge Jules' murder. He is recruited by the French Resistance's leader, Luc and British SOE agent Skylar Saint Claire (who has a history with Sean) to aid him in his quest. The story takes place during World War II and the German occupation of France, but the war itself is used as a backdrop to the main story, which is about Sean's fight to avenge Jules' murder, protect Jules' sister Veronique and kill Kurt Dierker.

The player is able to explore Nazi-occupied Paris, some of the French countryside and parts of Germany is full of Nazi outposts, searchlights, radars and other Nazi installations, as well as SOE supply drops. Alongside completing missions and optional side missions, scaling buildings and destroying Nazi installations play an integral role in gameplay, as these earn you contraband, which is a form of currency you can use to buy weapons, ammunition, explosives and upgrades. Even after the main storyline is completed, you can still complete optional missions, races and mini-games, as well as continuing free roaming about Paris, which can unlock you perks and more powerful weapons.

Color is a key element in the gameplay. Areas which are heavily controlled by the Nazis are represented in black and white, with the exception of the characters' irises, city lights, blood and blue symbols of the French Resistance and various Nazi symbols, which are bright red and complete with swastikas. In these areas, German soldiers are present in large numbers, making it far more likely that Sean will be detected in his rebellious activities. To "inspire" that district again, players must weaken the German forces occupying the area. In doing so, that district's citizens regain their hope, visually represented by the area becoming vibrant and full of color. Germans in these areas will not be completely evicted but Sean has a higher chance of escaping them since they will no longer be so ubiquitous and will primarily be centered on military bases, barracks, checkpoints, HQs, and other strategically important sites. In addition, the French people will play an active role in the struggle for colored zones. For example, if Sean gets into a fight with German soldiers in a colored area, allies like the French Resistance, the Maquis and even passing French civilians will intervene against the occupiers.

Throughout the game, Sean can upgrade his abilities and arsenal via "Perks", such as improving accuracy with a sniper rifle, ammo count for all weapons, damage and more. Perks are gained through actions, such as evading high-level alarms, sniping targets or demolishing a set number of German installations or vehicles with a certain requirement. The player also has the ability to scale buildings and run across rooftops, where sometimes British supply boxes can be found or to reach a good sniper's view of the ground beneath. Garages are available to the player, which can save parked vehicles and repair damaged ones. The player can also engage in fist-fights or use a more stealthy approach, such as sneaking around or using a Nazi's uniform as a disguise.

Should the player die while free-roaming, Sean will lose all of his weapons and grenades he had equipped prior to death. The player can buy weapons, ammunition, explosives, maps and other items from several black market merchants. Once Sean has purchased a weapon from the dealers, he can equip himself with that weapon at any time.

Every action performed by Sean generates suspicion; climbing buildings, setting explosives, getting too close to Nazis, etc. The suspicion meter aroung your minimap will fill faster or slower according to how suspicious Sean's particular actions are. If a Nazi gets too suspicious, he will raise the alarm. If that happens, the Nazis will pursue you until you are dead, or have escaped. To escape, you must leave the red circle on your minimap (which centres on Sean every time a Nazi spots him), use a hiding spot (small green dot on map) or go to a resistance fightback zone (large green dot) and kill enough Nazis while within it.

A code for a downloadable patch entitled "The Midnight Show" was free to those who purchased a new copy of the game for either the Xbox 360 or PlayStation 3. For the Windows version, the extra content was already included on the disc. The content was later released on Xbox Live Marketplace and on the PlayStation Network (in the UK, the content is free of charge) for people who did not have the code.

The extra content provides the player with extra brothels and hiding spots. It also includes a minigame in which the player can earn in-game items such as a car not found during the main campaign. Most notably, however, installing the add-on automatically renders all brothel girls in the game topless, although nudity can still be toggled on and off. This caused some controversy at the time of the game's release.

The game has been called the developer's swan song, since Pandemic Studios was liquidated after its completion. After the game was released, customers reported that the game was unplayable with an ATI graphics card. Some game retailers, including Direct2Drive, have placed a warning on their web sites declaring problems with the game's compatibility. A workaround requires the user to disable multi-core processing entirely, which would significantly decrease their computer's performance. Pandemic employees have acknowledged the issue and released a beta patch on December 18, 2009. The patch report currently state that users with quad core CPUs will possibly have severe streaming issues, which requires restricting the game to a single core as a workaround. This is despite the game's recommended specifications listing a quad core CPU.

IGN rated The Saboteur a 7.5/10, praising its sound, black and white visuals and "cheap thrills", while criticizing its unpolished gameplay and somewhat silly animation. GameTrailers gave the game 7.6/10, calling the game yet another open-world destruction game of 2009. The game was praised for being fun, although the site criticized the choppy voice acting, varying graphical quality and the unpolished end product. X-Play rated the game 3 out of 5, praising its unique look and setting, and the variety of gameplay, but criticized its poorly executed story, enemy AI and various glitches.

The PlayStation 3 version has been noted for its anti-aliasing technique on a console that has traditionally had difficulty with AA. Using one of the PS3's Synergistic Processing Units to perform after-image edge detection and blurring, under optimal conditions it manages equivalent to 16xAA. The game was frequently compared to Velvet Assassin, released the same year and featuring similar aesthetics and gameplay styles.

The Saboteur - Irishman in Paris Trailer 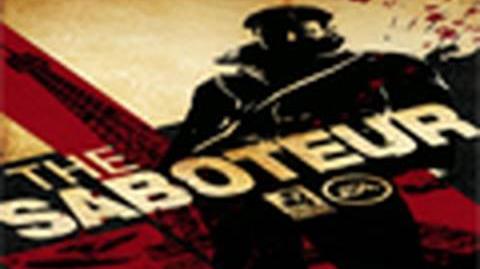