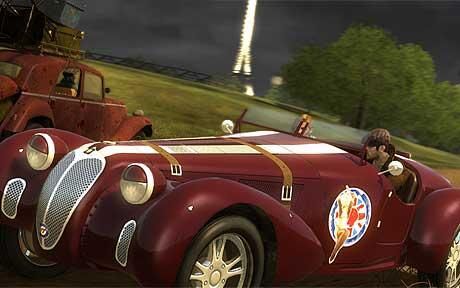 Vehicles are one of the most important aspects to The Saboteur. There are all sorts of cars to Sean Devlin, the main protagonist's arsenal, including any civilian car on the road, Nazi vehicles like the Sturmwagen. Tanks like the Wulf, and Race Cars such as his very own Aurora. Because The Saboteur is set in an open world Paris, including a full countryside, as well as the inclusion of Saarbrücken and Le Havre, there's a lot of the world to travel, and Sean will be depending on these vehicles to get him where he needs to go and help him on his missions.

Because of how many vehicles are available to Sean Devlin's disposal, he can collect them and spawn them at will at the Garage. This allows Sean to use any car he likes, so long as he can bring one to the Garage first, which acts as a form of mini-game to collect all of them. Eventually once Sean has collected 5 cars, he automatically unlocks the Altair race car, which is a great early race car. After collecting all of the Nazi vehicles, Sean can start collecting tanks he finds in the Garage, which allows Sean to pull of major mayhem when he needs to. The Garage overall is an incredibly useful feature.

Civilian vehicles are found all over the roads and can be stolen without getting into too much trouble. Civilian vehicles are typically very sluggish and poor moving, and though through the game, they don't get much more dependable, there are certain civilian cars that can be very useful, such as the Dugatti. As Sean Devlin goes through the game and is allowed entrance to the better Sectors of the city, better civilian cars can be found. Typically these cars are seen more as means to an end, and are often discarded or avoided when possible.

Race cars are an important aspect of the game as they are often the best mode of travel, being incredibly fast and easy to maneuver. Because Sean Devlin himself is a race car driver, race cars are very natural to drive and there are multiple to his selection. Their speed is not rivaled by any other group of cars, and should be selected for any long distances as they will get the player there much faster than any civilian car could. Sean himself has his own car, the Aurora, as well as multiple others, such as the Silver Dart, Altair, and the Silver Claw MK2.

Note: The race cars in Saarbrücken, Germany are not available from the beginning, even after illegally crossing the checkpoint into Saarbrücken; they don't spawn until after successfully passing one of the racing missions that Horst introduces you to—I hadn't checked again until after unlocking the Silver Claw MK II (reward for winning Country Race #2).

The next best set of vehicles that can be accessed are Nazi vehicles. While some can be found parked near Nazi outposts or in other places in the city, typically they are most commonly found once called in during an Alarm. The Nazi vehicles are easy to be grabbed during Alarms, and make them incredibly common as Sean will often be getting in trouble. Most Nazi vehicles are faster than the standard Civilian vehicle, including the Sturmwagen, the most common patrol vehicle, which is sent in during Alarm 1, or when sent to investigate a gun shot or explosion. The Sturmwagen for example is quite fast compared to most Civilian vehicles and has a great acceleration that rivals many other cars, even late into the game. The Gestapo Cruiser is also good with speed, but also packs it's own extra use with machine guns built into it, giving it a great defense on the road and great practicality for Sean Devlin.

Nazi vehicles are used for alarms and other patrols, but when there's real danger on the loose, the Nazi's will bring in the heavy stuff. This includes the Half-Track, Opel Truck, and a multitude of Tanks, such as the Wulf Tank, which Sean can find out in the world and take, or damage occupied tanks forcing the driver to exit. Tanks are key to ultimate mayhem and there are many of them. When Sean finds these, he can really do some incredibly damage around the city. Of course, when Sean gets in a lot of trouble, the Nazi's will send heavy armor of their own to deal with it.

While there are no flyable aircraft in the game, aircraft still hold a presence in The Saboteur. Most immediately, Zeppelins are found patrolling Paris and Le Havre at all times. They are found searching through the city and head towards explosions, gun fire, and alarms. They will also attack Sean Devlin with machine gun fire if he has been caught in an alarm and the Zeppelin can see him. Zeppelins create an interesting air presence that is constantly active. Planes are also in the game as in Alarm 5, a plane is called in and will actively fire at Sean. Planes and Zeppelins can be shot out of the sky with artillery pieces. Further, a Zeppelin can be entered in two missions, and during an SOE mission, Sean is tasked with destroying multiple planes on the ground. Aircraft hold a presence in this game, but at one point had a larger role planned as the developers intended the player to be able to fly them, but this feature was removed due to issues with streaming on the consoles.

Community content is available under CC-BY-SA unless otherwise noted.
Advertisement